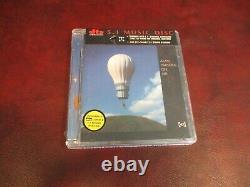 THE DTS CD is an out of print collectible! It is a DTS Entertainment release. Digital Surround for DTS-capable 5.1 sound systems. This CD is in the DTS 5.1 format and requires a DTS decoder or preamp to play.

This is our last COPY forever. THE DTS CD - "On Air" rates as one of Alan Parsons finest works to date.

This is an album of pure bliss for anyone who who calls themselves a melodic rock fan. It also stands as an excellent entry into the world of "concept albums", something that music fans like myself need more of! This time the concept is the history of flight, and Parsons pumps plenty of emotion into his subject matter with bold musical themes, and lyrical references to aviation, the Challenger space mission, and an especially intense (almost paranoid) ode to the fear of flying titled "Can't Look Down". Like previous Alan Parsons releases, "On Air" covers a wide variety of musical moods and styles, and this time you can expect much of the same.

"Too Close To the Sun" has a dreamy atmospheric quality, with lyrics about the fall of Icarus. "Brother Up In Heaven" is a lush piano-based ballad, with a fine vocal from former ELO Part 2 singer Neil Lockwood, the song also makes nice use of a sparse orchestral arrangement. "Fall Free" is a rocker with a powerful chorus, and an equally powerful vocal performance by Steve Overland. Another guest vocalist, Eric Stewart of 10cc, adds greatly to "Blue Blue Sky", a gentle acoustic piece which is reprised at the end of the album. "Cloudbreak" is an exhilarating instrumental with great guitar licks from long-time Parsons cohort Ian Bainson, another instrumental, "Apollo", is a throbbing burst of synths and electronic percussion, interspersed with quotes about the Apollo Mission from John F.

All in all, if you are a fan of Alan Parsons, or just quality melodic rock in general, then "On Air" should NOT be missed! Also, this is an album that sounds absolutely stunning through a good pair of headphones! Parsons has constructed a mix which takes full advantage of stereo panning, background arrangements, clever sound effects (which always have something to do with the song), and even snatches of conversations! (A bit reminicent of his production work on Pink Floyd's "Dark Side of the Moon") So if you don't have headphones, you may want to order a set to go with this CD! Too Close To The Sun 3.

Blown By The Wind 4. I Can't Look Down 6. Brother Up In Heaven Side Two: 1. One Day To Fly 5. FACTORY SEALED OUT OF PRINT PRODUCT is IRREPLACEABLE and therefore NOT RETURNABLE.

The item "ALAN PARSONS ON AIR DTS AUDIOPHILE SURROUND SOUND 2001 RARE LIMITED EDITION DVD" is in sale since Saturday, March 23, 2013. This item is in the category "Music\CDs". The seller is "mymusicfix2" and is located in Lake Forest, California. This item can be shipped worldwide.