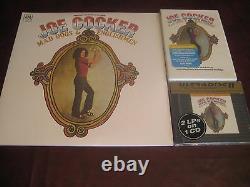 IN FACT THE FEW SITES HAVE THIS TITLE REMAINING ARE TWICE THE PRICE WE HAVE HERE. THAT'S HOW RARE AND COLLECTIBLE THIS TITLE IS IN THIS RARE 24 KARAT GOLD PRESSINGS.

Collectors Note : Over the last few year about. 009% of these MFSL titles were still available at numberous audiophile dealers. Do your home work and you will soon realize that you will be one of the last people in the world to own this sonic gem. This is a Special Price for this listing only. THIS TITLE IS GONE FROM ALL THE AUDIOPHILE RETAILERS THAT LAST YEAR HAD A FEW COPIES REMAINING OF THIS LIMITED EDITION 24 KARAT GOLD MASTERPIECE.

THIS COPY IS ONE OF THE LAST LEFT IN THE WORLD STILL IN COLLECTORS CONDITION (with no store strickers ever attached). Each CD was pressed directly from the original studio master session tapes ; the purest source of musical information and engineered to produce the finest CD sound quality available. Every compact disc delivers the music to you with all the depth, dynamics, and richness of the live recording session. We invite you to hear the three-dimensional quality of the music just as the artist intended for it to sound. The proprietary mastering technology extracts and transparently stores more musical information from the original master tapes than any other method in existence.

For the discriminating listener, the results include: a wider range of frequencies, increased depth and room dimension cues, clarity, and separation of instruments. The technology substantially decreases characteristics such as hardness and glare bringing the sound of CD even closer to the warmth and openess of analogue. Aluminum particles are rough, resulting in pits and irregularities on the playing surface. Gold particles are uniform and have a constant rate of reflection giving an even, reproductive sound quality. Also, 24K Gold CDs will not oxidize or tarnish and will last for years longer than traditional aluminum CDs. Do not Miss Out on this Rare Sealed masterpiece! MoFis 24-Karat Gold Pressing of this 2 Album Classic on one CD is a Limited Edition, Long Out of Print. Was one of the last produced in the MFSL ultimate listening series collection with very a limited pressing compared to other MFSL pressings. It is simply a sonic marvel using the Ultradisc Gain II Audiophile Mastering System.

This is the only audiophile mastering EVER of this Cocker masterpiece and is a tremendously rare in this 24-Karat Gold Pressing. You will be simply one of the last people in the world to own this rare sonic Gem. This is a true Collector's find for those individuals who want to own the finest and rarest pieces of musical history and display as a valuable item for your Collection or mantle on an attractive wrought iron black stand. It is similar to owning the artist's own Rare Gold Record Album in a Gold CD pressing. You will be one of the last people in the world to own these Limited Edition Long Out of Print Masterpieces that will add true value to your Collection.

On this listing before it skyrockets in value or will never be seen again. Jo e Cocker is joined by guests Leon Russell, Rita Coolidge, Jim Gordon, Carl Radle, and Jim Keltner. Singing classics like Honky Tonk Woman, Cry Me A River, Feeling Alright, Lets Go Get Stoned, The Letter, Delta Lady, Sticks& Stones, Bird on the Wire, Superstar, Blue Medley, Girl From the North Country, Give Peace a Chance, She Came Through the Bathroom Window and Sapce Captain a 70+ minute recording.

Overall, this 24-Karat Gold Masterpiece makes this Pressing sound more meaty and spectrally balanced. Listeners will appreciate how this recording has solid, low end with each instrument more fully represented than on the Original Recording. This epic performance is so alive and in your face you will feel you are on stage with Joe Cocker and his MAD DOGS AND ENGLISHMEN. Cry Me a River 6. Bird on a Wire 7. Let's Go Get Stoned 11. Blue Medley: I'll Drown in My Own Tears/When Something Is Wrong... I'll Drown In My Own Tears / When Something Is Wrong With My Baby / I've Been Loving You Too Long 12. Girl from the North Country 14. Give Peace a Chance 15. She Came in Through the Bathroom Window 17. Rita Coolidge, Leon Russell, Don Preston, Jim Keltner. Album Notes Ultradiscs are mastered from the original master tapes using Mobile Fidelity's proprietary mastering technique, then plated with 24 karat gold and housed in a stress-resistant lift-lock jewel box.

Includes liner notes by John Mendelsohn. One of the first classic post-Woodstock albums, MAD DOGS AND ENGLISHMEN was recorded at precisely the moment that Cocker and his bandleader Leon Russell found themselves, however briefly, at the epicenter of the rock & roll universe. The big hits here--the juiced-up version of Traffic's "Feelin' Alright, " the Memphis soul revamp of the Box Tops "The Letter"--have been ubiquitous for years, and remain as potent as ever. Some of the less familiar tracks are equally rewarding though, particularly the Cocker/Russell duet on Dylan's "Girl From the North Country" (with the composer in attendance), and the obscure early Ray Charles raver Sticks and Stones.

This one shot ensemble including veteran British musicians and the cream of then current L. Sessioneers was a great band, however unwieldy twenty-one members! And we're lucky to have this document of its only tour.

For 100's of additional rare out of print audiophile recordings factory sealed visit mymusicfix E-Bay Store by hitting the STORES TAB on this titles home page. MFSL LIMITED GOLD EDITION This 24-Karat Gold Limited Edition FACTORY SEALED CD is an audiophile collector's item that simply gives the feeling of being directly in the studio with the artist.

This recording is mastered from the Original Session Tapes and the disc is custom pressed using 24-Karat Gold (known for its superior qualities and resistance to oxidation). This Out of Print Gold bonafide collectible disc has all Liner Notes, Photos, and Artwork from the Original LP faithfully recreated. A SONIC WORK OF ART These Out of Print gems are the Finest/rarest of the audiophile CD market. Many over the last year have doubled or tripled in value.

The future of these collectibles is so exciting because each piece is a sonic work of art that will never be reproduced using this expensive 24-Karat Gold mastering process. You will be one of only a few thousand in the world owning this audiophile classic. Mad Dogs and Englishmen is a live album by Joe Cocker originally released in 1970. Accompanying Cocker is a choir, a three-piece horn section and several drummers.

The album yielded the singles "Cry Me a River" and Give Peace a Chance. This 1970 high-energy album from A&M is a show of talent which includes Leon Russell, Chris Stainton, Rita Coolidge, Don Preston, Carl Radle, Jim Gordon, Jim Keltner, etc. Overall, the sound is meaty and perfectly balanced. Listeners will appreciate how this performance of Joe Cocker and his Mad Dogs & Englishmen is so alive and in-your-face.

Remastered from original 1/4 tape. Chuck Blackwell, percussion and drums. Let's Go Get Stoned. Blue Medley: I'll Drown In My Own Tears / When Something Is Wrong With My Baby / I've Been Loving You Too Long. Girl From The North Country. She Came In Thru The Bathroom Window.

DVD 35TH ANNIVERSARY EDITION - One of the greatest rock films of all time, Joe Cocker's Mad Dogs & Englishmen gets digitally overhauled and released on DVD for the very first time! This film captures one of the most exciting concert tours ever and defines the spirit of a generation in much the same way as Woodstock and The Last Waltz. Joe Cocker and friends, among them rock legend Leon Russell and Rita Coolidge, cut loose with close to two dozen incredible songs.

Mad Dogs & Englishmen stands today as one of the most dramatic visual records of a tour and a time, with backstage footage, fan interviews and electric performances. Remastered in 5.1 surround and stereo, this DVD also includes a Personal Playlist, allowing the viewer to sequence & play this film's full-length, classic live performances like "Delta Lady, " "With A Little Help From My Friends" and She Came In Through The Bathroom Window. As an added bonus, the package comes with a 24-page Pressbook from the original theatrical marketing of the film in 1971. FROM THE ANGLO-SAXOPHONE WILL THE CIRCLE BE UNBROKEN DELTA LADY FEELIN' ALRIGHT CHANGE IN LOUISE DARLIN' BE HOME SOON GOING TO NEW YORK CITY SUPERSTAR WE LOVE YOU CONRAD PLEASE GIVE PEACE A CHANCE SHE CAME IN THROUGH THE BATHROOM WINDOW LET IT BE THE LETTER STICKS AND STONES LAWDY MISS CLAWDY BIRD ON A WIRE HONKY TONK WOMAN SPACE CAPTAIN SOMETHING WITH A LITTLE HELP FROM MY FRIENDS THE BALLAD OF MAD DOGS & ENGLISHMEN BONUS MATERIAL: DTS 5.1 SURROUND SOUND DOLBY 5.1 SURROUND SOUND DOLBY STEREO PERSONAL PLAYLIST 24-PAGE PRESSBOOK. Who would ever have thought that Joe Cocker would still be recording and touring 35 years after the release of Mad Dogs and Englishmen.

This 35th anniversary edition DVD has one big advantage over the original release, and that is superior sound and picture quality. This film captures the frenzy and energy of one of the greatest rock tours ever. Cocker and a 43 member entourage stormed across America for several weeks, playing to packed houses and rave reviews.

Although this event nearly ruined Joe Cocker, it never the less captures a young Joe Cocker in his wired prime, belting out such favorites as "The Letter", "Feelin Alright", "Delta Lady", "Space Captain", "With A Little Help From My Friends", "She Came In Through The Bathroom Window", "Honkey Tonk Woman", and a heartfelt rendition of George Harrison's "Something", just to name a few. This film captures a hippie commune circus with back stage footage, interviews etc. To music fans today, this will seem somewhat dated, but to us baby-boomers, this was cutting edge rock music of the times, when we had a proliferation of AOR radio playing this music everyday. I highly recommend this Dvd to all classic rock fans, as well as the companion 35th anniversary cd, which is loaded with 10 bonus tracks, which has now displaced the original recording as obsolete. Hopefully, the Rock n Roll Hall Of Fame will wake up, and realize that COCKER POWER is alive and well, and induct this deserving rock legend. Check out Mymusicfix or additional audiophile recordings by hitting ME or the Mymusicfix STORES Tab on this Titles Home Page to view all of our other items on E-Bay. Mymusicfix has been told that we have the best collection of Rare Out of Print Audiophile music on E-Bay. Enjoy being one of the last few to own/collect this Rare piece of musical history. International Buyers - Please Note. OUT OF PRINT PRODUCT is IRREPLACEABLE and therefore NOT RETURNABLE.

Because of Postal Regulations in following countries -- U. International Buyers are responsible for their country's. This item is in the category "Music\CDs".

The seller is "mymusicfix2" and is located in this country: US. This item can be shipped worldwide.