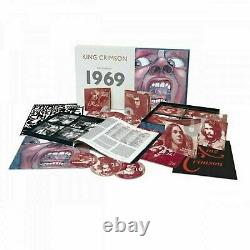 And a mega collection box that recorded the 1969 live, recording session, which was a golden year for both the rock world and them, and Giles, Giles & Flip sound source that became the mother of Crimson! Experience a different dimension of 3D sound image!

An era in which stereoscopic sound image reproduction systems that could only be experienced in movie theaters can now be reproduced in home theaters. Crimson follows the overwhelming three-dimensional effect of The Beatles "Abbey Road" released in 2019! Only this box contains the 2020 Dolby Atmos mix supervised and produced by Steven Wilson!

A high-spec box set configuration centered on 4 Blu-ray (audio) to leave the world rock heritage in the best form for posterity! Specs have been upgraded from DVD (audio), which was the mainstream in the Crimson Anniversary Box, to Blu-ray (audio) -based! Some are in the 4-disc set "Crimson King's Palace 50th Anniversary Box" released in 2019. Many of the first Blu-ray recorded sound sources have been released! Giles, Giles & Flip's "The Brondesbury Tapes" (14 tracks in this box) The sound source is the first Blu-ray and recorded in the high resolution format of 24/196. Anniversary mixes that exist until the 2020 mix are also recollected in the best possible way! You can enjoy it even if you only have a CD or DVD playback environment! Anniversary mix up to 2019 stereo mix, session sound source is recorded on CD, DVD (audio) with the same content. The Collector's Club Live Archive is included in the CD part.

A masterpiece original booklet with rich content that can be said to be one book each time is essential! A behind-the-scenes story full of treasured episodes by the band's official biography writer, Sid Smith, an essay from an engineer's perspective by David Singleton, and the words of the great Robert Fripp. The Crimson Anniversary Box is an important component as well as the recorded sound source, and this booklet is a passport to enjoy the box more deeply. This time as well, a Japanese translation booklet translated by Makoto Uenishi, who has been in charge of translation since the inauguration of the anniversary series, will be included! Number of components: 26 Total recording time: 00:00:00 [4 Blu-ray (audio): Only audio recorded on Blu-ray] 1.

Session 6: July 31, August 6, August 13 Includes "Moon Child", "Crimson King's Palace", and sound effect production sessions Giles, Giles & Flip Source: Selected Recordings 1968 Giles, Giles and Fripp BBC Sessions Source: BBC Sessions and Trees DVD Region Code # 2 / Japan This product is a product assembled in Japan by importing discs and accessories produced overseas. It may break or cause a fire. International Buyers - Please Note. Even if you think to yourself, But the item I want is only available in Japan.

, make sure to consult with us before giving up hope. We will look for and suggest the best products on your behalf. Feel free to ask us any other items you need from Japan!! Don't hesitate, just ask us. Listing and template services provided by inkFrog. This item is in the category "Music\CDs". The seller is "kunoichi_music_square_for_listeners" and is located in this country: JP.