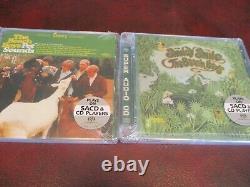 THE BEACH BOYS - PET SOUNDS & SMILEY SMILE COLLECTION OF THE AUDIOPHILE HYBRID SACD IN BOTH THE MONO & STEREO MIXES. Super Audio CD is re-mastered by.

The greatest advancement since the introduction of stereo, Super Audio CDs employ the innovative single-bit encoding system, Direct Stream Digital. Every SACD player performs superbly with Compact Discs. And Hybrid SACDs will play back beautifully on CD players. BEACH BOYS PET SOUNDS SACD HYBRID IN BOTH THE MONO & STEREO MIXES - Mastered by Kevin Gray at Cohearent Audio from the Original Master Tapes or Best Sources Available! Rolling Stone 500 Greatest Albums of All Time - Rated 2/500! Rolling Stone 500 Greatest Songs of All Time - "Sloop John B" - Rated 278/500! Original mono mix produced by Brian Wilson, stereo mix produced by Mark Linett under the supervision of Brian Wilson. It was Pet Sounds that blew me out of the water... I love the album so much. I've just bought my kids each a copy of it for their education in life.

I figure no one is educated musically'til they've heard that album. All of us, Ginger (Baker), Jack (Bruce), and I consider Pet Sounds to be one of the greatest pop LPs to ever be released. It encompasses everything that's ever knocked me out and rolled it all into one. A musical legacy that began in Hawthorne, California and went on to conquer the world. Analogue Productions presents the ultimate pressings of 14 essential Beach Boys albums!

Mastered by Kevin Gray, most from the original master tapes, now presented on Multichannel SACD, these are awesome recordings to experience. For the early part of the Beach Boys career, all of their singles were mixed and mastered and released only in the mono format. And the mono of those times worked well for Brian Wilson? Famed co-founder, songwriter and arranger? Who suffers from partial deafness.

The mono mixes were where Wilson paid intense attention, and the dedication paid off! Analogue Productions has taken 10 of the most classic, best-sounding Beach Boy titles ever and restored them to their mono glory!

Pet Sounds is famous for its use of multiple layers of unorthodox instrumentation as well as other cutting edge audio techniques for its time. It's considered the best Beach Boys album, and one of the best of the 1960s. The group here reached a whole new level in terms of both composition and production, layering tracks upon tracks of vocals and instruments to create a richly symphonic sound. Conventional keyboards and guitars were combined with exotic touches of orchestrated strings, bicycle bells, buzzing organs, harpsichords, flutes, Theremin, Hawaiian-sounding string instruments, Coca-Cola cans, barking dogs, and more. It wouldn't have been a classic without great songs, and this has some of the group's most stunning melodies, as well as lyrical themes which evoke both the intensity of newly born love affairs and the disappointment of failed romance (add in some general statements about loss of innocence and modern-day confusion as well). The spiritual quality of the material is enhanced by some of the most gorgeous upper-register male vocals (especially by Brian and Carl Wilson) ever heard on a rock record. "Wouldn't It Be Nice, " "God Only Knows, " "Caroline No, " and "Sloop John B" (the last of which wasn't originally intended to go on the album) are the well-known hits, but equally worthy are such cuts as "You Still Believe in Me, " "Don't Talk, " "I Know There's an Answer, " and I Just Wasn't Made. It's often said that this is more of a Brian Wilson album than a Beach Boys recording (session musicians played most of the parts), but it should be noted that the harmonies are pure Beach Boys (and some of their best).

VH-1 named Pet Sounds as the No. 3 album in the Top 100 Albums in Rock'n' Roll History, as judged in a poll of musicians, executives and journalists.

It's been ranked No. 1 in several music magazines' lists of the greatest albums of all time, including NME, The Times and Mojo Magazine. 2 in Rolling Stone's 500 Greatest Albums of All Time list. SACD Stereo & Mono SACD Layer. This Hybrid SACD contains a'Red Book' CD Layer which is playable on most conventional CD Players! Mastered by Kevin Gray at Cohearent Audio from the original master tapes or best sources available. Original mono mix produced by Brian Wilson.

Wouldn't It Be Nice. Don't Talk (Put Your Head On My Shoulder). I'm Waiting For The Day. Let's Go Away For Awhile.

I Know There's An Answer. I Just Wasn't Made For These Times. The Beach Boys Smiley Smile Hybrid Stereo & Mono SACD.

After the much-discussed, uncompleted Smile project which was supposed to take the innovations of Pet Sounds to even grander heights collapsed, the Beach Boys released Smiley Smile in its place. To clarify much confusion: Smiley Smile is an entirely different piece of work than Smile would have been, although some material that ended up on Smiley Smile would have most likely been used on Smile. Also, much of Smiley Smile was in fact recorded after the Smile sessions had ceased. For fans expecting something along the lines of Sgt. Pepper (and there were many of them), Smiley Smile was a major disappointment, replacing psychedelic experimentation with spare, eccentric miniatures.

Heard now, outside of such unrealistic expectations, it's a rather nifty, if rather slight, effort that's avant garde in the extreme.'Wind Chimes,''Wonderful,''Vegetables,' and much of the rest is low-key psychedelic quirkiness, with abundant fine harmonies and unusual arrangements. The standouts, nonetheless, were two recent hit singles in which Brian Wilson's ambitions were still intact: The inscrutable mini-opera'Heroes and Villains,' and the number one hit'Good Vibrations,' one of the few occasions where the group managed to be recklessly experimental and massively commercial at the same time. Original mono mix produced by The Beach Boys.

International Buyers - Please Note. FACTORY SEALED OUT OF PRINT PRODUCT is IRREPLACEABLE and therefore NOT RETURNABLE. Because of Postal Regulations in following countries -- U. (England, Ireland, Wales and Scotland), SOUTH AMERICAN COUNTRIES, QATAR, PHILIPPINES, SRI LANKA, ISRAEL, RUSSIA, MEXICO and MALTA. Mymusicfix has been told we have the best collection of Rare, Out of Print music collectibles on E-Bay.

This item is in the category "Music\CDs". The seller is "mymusicfix2" and is located in this country: US.