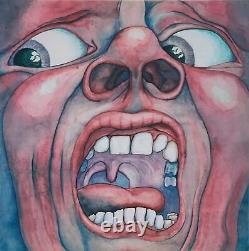 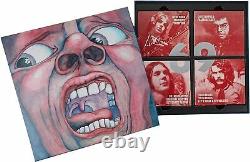 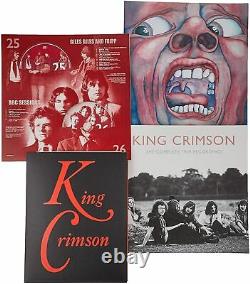 Thank you for visiting our page. The Complete 1969 Recordings Japan Assemble Package (Limited Edition). Introduction ¦ 51st year of shock! "Crimson King's Palace" ultimate collection box "The Complete 1969 Recordings" completed! Has reigned at the top for half a century as a masterpiece of progressive rock The strongest album "Crimson King's Palace".

And a mega collection box that recorded live performances, recording sessions in 1969, which was a golden year for both the rock world and them, and Giles, Giles & amp; flip sound source, which became the mother of Crimson! An era where the three-dimensional sound image reproduction system that could only be experienced in movie theaters can now be reproduced in home theaters.

Only this box contains the 2020 Dolby Atmos mix supervised and produced by Steven Wilson! ¦ High-spec box set centered on 4 Blu-rays (audio) to preserve the world rock heritage in the best form for posterity Composition! Specs have been improved from DVD (audio), which was the mainstream in the Crimson Anniversary Box, to Blu-ray (audio)!

Some are the 4-disc set "Crimson King's Palace 50th Anniversary Box" released in 2019. But many of the first Blu-ray recording sound sources! Giles, Giles & amp; Flip's "The Brondesbury Tapes" (14 tracks in this box) The sound source is the first Blu-ray and recorded in high resolution format of 24/196. Anniversary mixes that exist up to the 2020 mix are also recollected in the best possible way!

¦ You can fully enjoy even if you only have a CD or DVD playback environment! Anniversary mixes and session sound sources up to the 2019 stereo mix The same sound source is recorded on CD and DVD (audio).

The Collector's Club Live Archive is included in the CD part. ¦ A masterpiece original booklet with rich content that can be said to be one book each time Japanese translation is essential! Behind story full of treasured episodes by the band's official biography writer Sid Smith, from an engineer's perspective by David Singleton Essay, and the w. If "Made in Japan" is NOT described on whole listing page, Items are manufactured in other country China, Vietnam and etc. We treat Japanese Market Usage Items. So items have only Japanese Manual & Menu Language. Japanese Menu Only : Panasonic Camera English Menu available : Nikon, Canon. Voltage:100V, Plug :Type A, FM Tune:70-90MHz Please check your country's condition for use. [International Buyers - Please Note]. We do our best for you!!!! If you don't do that, you may not receive compensation and new item from us even if your item is damaged and lacked.

Please check your country's rule yourself. This item is in the category "Music\CDs". The seller is "kazumi1980" and is located in this country: JP.