The Move Magnetic Waves Of Sound Best Of The Move New CD With DVD, Deluxe E 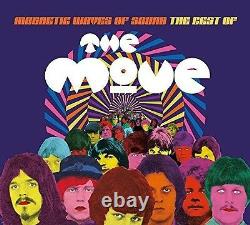 Walk Upon the Water 7. Flowers in the Rain 8. Cherry Blossom Clinic Revisited 14. When Alice Comes Back to the Farm 16.

Brontosaurus - April 1970 22. When Alice Comes Back to the Farm - December 1970 Two disc (CD + NTSC/Region 0 DVD) pressing. 2017 compilation from the iconic British band led by Roy Wood (and later featuring future ELO leader Jeff Lynne). Of all of the groups to emerge in Britain in the latter half of the 1960s, The Move was arguably one of the finest. A powerful act on stage, the group were blessed with one of the most imaginative songwriters of his generation in Roy Wood. Magnetic Waves Of Sound features all of The Move's UK hit singles, along with key album tracks from their four studio albums. The accompanying hour long DVD in this collection is a true first, and features 21 appearances on BBC TV and German television and a promotional film, all shot between 1967 and 1970. These include a performance of'Fire Brigade' on Top of the Pops from February 1968 and the band's entire Colour Me Pop performance for BBC 2 from January 1969. Also featured is a rare promotional film of'I Can Hear the Grass Grow', a trio of songs performed live from the German TV show Beat, Beat, Beat (recorded in June 1967) and a fine selection of Move appearances on the German TV show Beat Club, all gathered together on DVD officially for the first time.

Magnetic Waves of Sound is a fitting celebration of the legacy of The Move and includes a lavishly illustrated booklet and features a new essay by Mark Paytress and also includes a poster. The item "The Move Magnetic Waves Of Sound Best Of The Move New CD With DVD, Deluxe E" is in sale since Monday, January 30, 2017. This item is in the category "Music\CDs". The seller is "all_your_music" and is located in Shepherdsville, Kentucky.