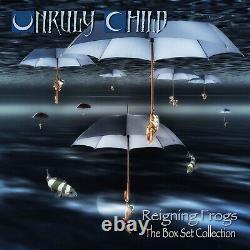 Was released on CD (5 Disc Box Set Limited Edition of 1000) through Frontiers in 2017. Reigning Frogs is an Unruly Child Box Set which encompasses the whole independent production from the band featuring singer Marcie (a/k/a Mark) Free, guitarist Bruce Gowdy and keyboardist Guy Allison. The box set includes the Waiting For The Sun album which was originally released in 1998, which featured a line-up with singer Kelly Hansen (ex Hurricane, now with Foreigner), Gowdy and Schellen (with Ricky Phillips of Styx as special guest on bass). Second album included in the Box Set is The Basement Demos which is a release that features all the demos that the band recorded in preparation of their first record for Interscope. The album also includes a bonus DVD with rare live in studio, interviews and recording sessions from the same period. While slightly more proggy at times, UCIII remains a very fine release on its own. The fourth record in the box is the awesome Worlds Collide which featured the full reunion of the original lineup of the band featuring Gowdy-Allison-Free-Antonino-Schellen. This is truly a release that brings back the magic of the early demos and first record.

Another very fine and classy melodic rock release featuring the original lineup members. The box set includes the cds in vinyl replica and includes all lyrics, a total of three bonus tracks (unreleased outside Japan) and a 20 pages booklet including exclusive stories written by Gowdy, Free and Allison and photos from the archives. A superb release limited to. All our CD's are original pressings. All CD's/DVD's are despatched by 2nd class post in UK (free).

If you have any questions relating to this item, please ask. All issues can and will be resolved. The item "UNRULY CHILD Reigning Frogs CD Box Set (5 Discs) Limited Edition NEW SEALED OOP" is in sale since Tuesday, March 9, 2021. This item is in the category "Music\CDs".